An Updated Genetic Test May Have Saved My Life

An Updated Genetic Test May Have Saved My Life 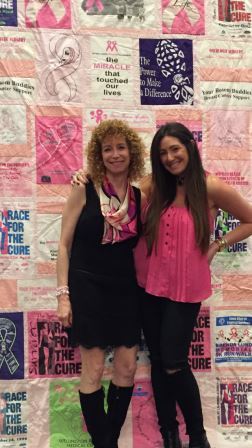 My mom and I have always been close.  I am her only child and she raised me as a single parent.  In 2007 when she was diagnosed with Stage 1 breast cancer at age 48, I was devastated.  Her doctors’ first recommendation was to do genetic testing for the BRCA gene mutation, since we are of Jewish Ashkenazi descent and have a family history of various cancers.  Testing positive would directly affect her treatment plan as it would mean she was at a very high risk for ovarian and breast cancer.  It would also mean a 50% chance that the gene mutation would be passed to me and increase my risk of the same fate.

Dealing With A Lumpectomy & Radiation

After my mom tested negative for BRCA1 and BRCA2, she had a lumpectomy and radiation.  Other than being on hormone therapy, we felt that cancer was behind her.  My mom’s negative BRCA test gave me peace of mind that I had no greater risk of my own breast cancer diagnosis.  Without a genetic component, my breast cancer chances were no more than the average woman’s.

Four years later my mom received a second diagnosis of early-stage breast cancer after finding another lump.  This time she needed a double mastectomy, reconstruction and a total hysterectomy that ended up causing several infections in the radiated breast and led to four more surgical procedures.  After watching my mom endure another long struggle with this disease, I decided that I would remove both my breasts without hesitation, if I ever was diagnosed with breast cancer.

For several years we had a false sense of security based on my mom’s negative BRCA result. Everything changed when, during a routine exam, my mom’s gynecologist made a suggestion for her to update her genetic testing to include other gene mutations besides BRCA that had been recently discovered.  That may have saved my life.

She recommended that my mom update her genetic test from 2007 since new gene mutations with cancer links had subsequently been discovered.  As it turned out, my mom’s updated test came back with a positive result for CHEK2, a lesser well-known gene mutation that is also a prime factor in predisposition for breast cancer.  This particular gene not only puts you at a higher risk, but also increases the chances of having a recurrence within 10 years.  If CHEK2 had been known when my mom was first diagnosed, she could have had a double mastectomy and avoided all of the surgeries, procedures, pain and worry that came with a second breast cancer diagnosis.

With a 50% chance that I inherited the gene mutation from my mom, I went for genetic testing only to learn I was a carrier as well.  Prior to knowing that I had CHEK2, it was easy for me to say that I would choose to have a mastectomy if I ever actually had breast cancer.  The decision was much more difficult once I was faced with the reality that I, in fact, was living with CHEK2.  Still, at age 32, I chose to have a prophylactic double mastectomy with reconstructive surgery which potentially saved my life.  It was a long journey for me physically, mentally, and emotionally but after seeing what my mom went through, I knew I made the right decision to be proactive.

BRCA receives a great deal of publicity and recently many people have been sharing their stories.  It is a topic being integrated into the general media as evidenced by former White House Press Secretary Kayleigh McEnany speaking about her experience at the RNC, and Christina Applegate’s character in the Netflix series “Dead to Me”.  When I tell people that I had a preventative double mastectomy because of a gene mutation, they assume I had what Angelina Jolie had.  But my story emphasizes that there are other genes besides BRCA to investigate if you have a family history of cancer.  Researchers have identified many other genes  associated with breast cancer and hopefully many more new genes will be discovered in the future.  My mom and I are examples of how genetic counseling and updating test results could give someone the knowledge to save their life.

Today I can call myself a previvor, someone who has a predisposition to cancer but hasn’t yet had the disease.  Thanks to modern medicine, I can take measures to ensure that I don’t pass my CHEK2 gene mutation to my children.  I hope that by sharing my story, it educates and inspires others to have genetic testing or to update an old test.  This simple step can make a world of difference in cancer prevention, treatment and outcome, and possibly saves lives for generations to come.

My mother and I are now both a part of Sharsheret’s Peer Support Network, a network of thousands of women newly diagnosed or at high risk of developing breast cancer or ovarian cancer, who share similar diagnoses and experiences. As peer supporters, we have already benefited from this rewarding experience of supporting other women across the country by sharing our story, listening to their challenges and empowering them for the road they have ahead. Nobody should go through a cancer diagnosis, or a decision about what to do about a genetic mutation alone. Organizations like Sharsheret make sure of this, and also work to educate people about knowing about the other gene mutations beyond BRCA. Knowledge is power, and we are so grateful to be a part of Sharsheret’s vast network of women to share our story and hopefully save lives through spreading awareness.