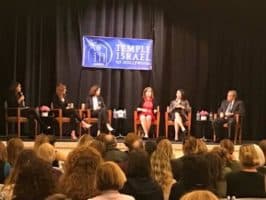 What percentage of breast cancer is hereditary?
Probably between 5% and 10% of breast cancer is hereditary. Much of hereditary breast cancer is related to genes we don’t know how to look for yet.
Do we know why the BRCA mutations appear more often in Ashkenazi Jews versus in Sephardic, or in the general population?
The reason has to do with population genetics. The mutations that appear more commonly among Ashkenazi Jews are called “founder mutations”. These mutations have been present in the Jewish population for over 2000 years, before there were divisions between Ashkenazi and Sephardic Jews. The frequency in founder mutations may increase after a population bottleneck. A temporary smaller population may be over-represented by carriers, and when the population then increases, the frequency increases. The same population genetic effects are not seen as strongly among Sephardic Jews because of their more widespread locations.

Does birth control increase risk?
Use of birth control may slightly increase breast cancer risk. It may also more significantly decrease the risk of uterine and ovarian cancer.

When would you recommend telling a child about a possible hereditary link and have them tested?
The NCCN (National Comprehensive Cancer Network) recommends breast imaging (mammogram, sonogram or breast MRI) to begin around age 25. That is the age when it is recommended to begin breast imaging if the results are positive for a mutation. It is not unreasonable to wait until after college graduation to talk about genetic testing with young adults. In a family where women are diagnosed at particularly young ages, it may be prudent to test at younger ages. A healthcare professional should be consulted in this situation.

Can the BRCA mutation skip a generation? I have been tested and I am negative. Should my husband be tested so my kids know their risk? I have not had cancer but it’s on both sides of my family and we are Ashkenazi.
Genes themselves are physical substances, and have no way to get from a grandparent to a grandchild without the parent being a carrier. Genetic traits do skip generations, since not every gene we carry is expressed. Not all men who carry BRCA mutations will get cancer. However, they can pass the mutation to their daughters and sons. Similarly, some women who are BRCA mutation carriers do not get cancer. Individuals can inherit a mutation from either parent.

Is there any benefit, from a treatment or counseling perspective, to having a full panel genetic test if the patient already has been diagnosed with breast cancer and only had the BRCA test (3 site)?
Yes, a person diagnosed with breast cancer who tests negatively on multisite (3 site) testing may consider full panel testing. This has become a more common option as the price of genetic testing has gotten so low. Someone who has tested positively for a mutation in BRCA1 or BRCA2 is much less likely to benefit from updated testing.

If I’ve tested negative through 23andMe, does that mean I won’t get cancer? Is the information reliable?
It does not mean that you won’t get cancer; anyone can get cancer. The test by 23andMe looks at only BRCA1 and BRCA2, not any other cancer predisposition genes. Also, it doesn’t look at all of the BRCA1 and BRCA2 mutations, only the mutations that are common in people with Ashkenazi ancestry.

If I tested negative for the BRCA mutation at age 30, and then I do the test at age 50, can the results change?
No, mutation status doesn’t change. Sometimes an improved test will find a mutation that was previously missed, but that is because of inadequate testing the first time.

Can men register for the BFOR Study as well?
Yes, men and women can participate. The BFOR study provides genetic testing for common BRCA mutations for women and men of Ashkenazi (Eastern European) Jewish ancestry, age 25 or older, in four U.S. metropolitan areas. 95% of American Jews are Ashkenazi. Genetic counseling is included in the study. Cedars Sinai is one of the hospitals participating in the study. You can register here: https://www.bforstudy.com/.

If a male was tested five years ago at 43, and was positive for BRCA1, does he now need to get any further tests? His mother was also positive for BRCA1.
Most likely this individual doesn’t need additional testing. However, to be sure, it would help to find out about any other history of cancer in the family. In general, if all of the cancer can be explained by a mutation in BRCA1, no additional testing is indicated. However, if there is a lot of cancer that doesn’t appear to be explained by a BRCA1 mutation, additional testing may be indicated.

My mother was diagnosed at 66 with breast cancer (she’s a survivor at 82 now) and recently my brother (54) was diagnosed with an aggressive form of prostate cancer. Also in the family – my mother’s sister died of ovarian cancer at 66 and both grandmothers and great-grandmother (on mother’s side) had both melanoma (grandmother) and colon cancer (great-grandmother). Does this present a high risk for me?
This family history may be caused in part by an inherited mutation. It is often best for a person who has had cancer to be tested first. This is because the person with cancer is most likely to carry a mutation compared to other family members who are unaffected with cancer. You should consult with a genetic counselor who can best advise you about your specific situation.

I’m curious why there is no research on Ashkenazi Jews and blood cancers (specifically lymphoma/leukemia). Personally my grandfather, mother and uncle all had blood cancers with similar pathology. Where can I find information?
Blood cancers are usually not inherited. However, in a family like yours where multiple family members have been diagnosed with blood cancers of similar pathology, it may make sense to consult a genetic counselor to arrange for specialized testing.

For a full list of all cancers related to the BRCA1 and BRCA2 mutations, and appropriate screening recommendations for these cancers, please visit the BASSER Center for BRCA website: https://www.basser.org/patients-families/managing-cancer-risk