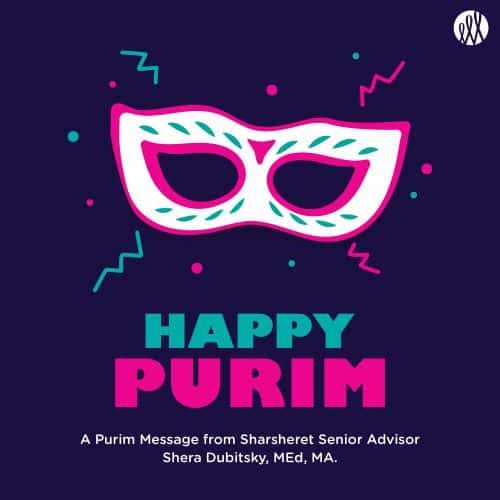 To make a long story short….Once upon a time, there lived a man called Mordechai, who lived with his niece Esther. Well, we’re not sure if she was his niece. Maybe she was his wife… or sister. The point is they were related somehow. In the same town, there was a king named King Ahashverosh.  His first marriage ended poorly, and he wanted a new queen. Esther was chosen to be his new queen. She never revealed to him that she was Jewish. Haman, a powerful man who had the King’s trust, expected everyone to bow down to him. One day Haman met Mordechai, and Mordechai did not bow down to him.  Haman became very angry and suggested to the King that Mordechai and his people should be killed. The King went along with Haman’s plan to annihilate the Jewish people and sent a decree to all the lands. For almost a year, many Jews remained in hiding. They avoided public events. They feared for their safety. They were vulnerable. Their future was precarious. Mordechai sent a message to Esther to compel the King to reverse his decree. Long story short, Queen Esther revealed to the King that she was Jewish, and she and her people were the target of Haman’s evil plan. The King sent out a new decree declaring that the Jews could now take to the streets, feel safe, and live well in his kingdom. The Jews had cause for rejoicing. They had emerged from darkness into light.

Any part of this story sound familiar? (Hint: refer to the bolded, italicized, and underlined section above.) Living with a cancer diagnosis is scary. Many women report feeling vulnerable. Many fear for their unknown future. Life feels precarious. And if that wasn’t enough…. Covid-19 happened. For over a year, we have been hunkered down in our homes, avoiding public events, and protecting our well-being. We are waiting for that decree from the government that will declare our freedom and safety. What could our lives look like following this unimaginable time in our lives?

Included in the reading of the Purim story, we are encouraged to revisit this story yearly, lest we forget life’s fragility. We are instructed to be charitable and to think of others. We embrace this holiday with joy, dressing up in costumes and ending the holiday with a celebratory feast, an unexpected aftermath from such a frightful and vulnerable time in our history.

It’s hard to imagine what our world will look like post a cancer diagnosis or Covid. Yet the story of Purim can serve as a guide on how to navigate uncharted waters, believe in our inner strength and hold on to hope that we can transform our future. Take action when we see we can make a difference. Think of others who are equally vulnerable because we’re stronger together. Never lose hope. Remember to feast, embrace joy, and if it helps, wear a great costume (mask) that will lift your spirits.