By Shera Dubitsky, Sharsheret Director of Navigation and Support Services May 25, 2017 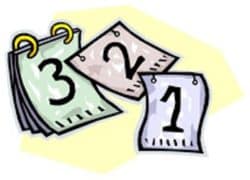 Beginning the second night of Passover until the night before the holiday of Shavuot, many Jews engage in the ritual of the counting of the Omer, the 49 days from Passover to Shavuot. The counting signifies a link between the Exodus from Egypt and slavery to the giving of the Torah and redemption. Every night after sundown, the Omer is recited using unusual terminology. For example we say, “Today is eighteen days, which is two weeks and four days of the Omer.”

As I have been reciting the Omer this year, I am reminded of how I frequently hear the women of Sharsheret counting. “Three more days until my surgery…. One week post-surgery, Three days waiting for my pathology report…. Third treatment in, five more to go….Today is two years post-treatment…. Six months until my next follow-up scan….”

Counting. Everything is carefully measured in time, particularly when faced with the challenges of living with cancer. The counting represents a link between feeling enslaved by cancer and treatments, and the hope for freedom from this disease. And then the counting begins again – but in a new way – “six-month survivor, five-year survivor, ten years since my diagnosis.”

There is another dimension to this counting. Women living with cancer are not merely watching the calendar; we are making our lives count. Every day I hear from women who are strengthening their relationships, not sweating the small stuff, and finding meaning in their lives. Throughout this journey, women are experiencing “aha moments” and they are sharing what they have learned and supporting one another. One caller recently shared that when she was home recovering from surgery, she spent a lot of time sitting with her kids, chatting, laughing, and watching television. These were moments that she would have earlier described as “doing nothing,” because she wasn’t running around doing things with her kids and for the kids. She realized that being still and focused in the simple moment of spending time together, made her feel more connected to them.

As I approach Shavuot, I am grateful to the women and families of Sharsheret for reminding me that it’s not just about counting time, but about making time count.