Faith is What Kept Me Going

Faith is What Kept Me Going 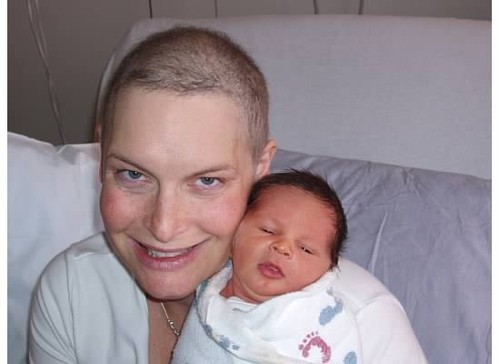 Breast Cancer… two simple, yet powerful words! They have always been a part of my life. My mother and grandmother both died from breast cancer, both too early in life. I spent my childhood living through breast cancer. I began having mammograms at the age of 30 because of my family history. In early 2004, my husband and I were blessed with the birth of our beautiful daughter. Shortly after I stopped breast feeding I went for a routine mammogram. There it was – the cancer had arrived! Luckily, it was caught extremely early.

I decided to have a bilateral mastectomy with reconstruction. My margins came back clear; I did not need any additional treatments. Genetic testing came back negative for BRCA1 or BRCA2. I believe I am a carrier of a gene that is yet to be discovered.

My story does not end there, two years later in October 2006, I received word that my 12-week-old fetus was viable. After experiencing two miscarriages, my husband and I were overjoyed. One day, I performed a breast self-exam to what was left of my breast tissue. As I was feeling about just where my new tissue met my old tissue, I felt a small ‘thing.’

I was able to see my local doctor immediately. She performed an ultrasound and biopsy on a Friday morning. By Monday afternoon I was diagnosed with my second bout of breast cancer in three years. The question of what to do and when became even more critical. This was a new occurrence. After many doctors’ visits, my husband and I decided that I would have the tumor removed and start chemotherapy at week 22 of our baby’s gestation. Yes, I was nervous and yes, I was scared. But I have always had faith, and faith is what has kept me going through out this whole journey. On March 22, 2007, our son arrived. He was four weeks early, so my treatments moved forward. He had a full head of hair, a good weight and powerful lungs. I am done with chemotherapy, radiation and Herceptin. I have gotten that “clean bill of health.” Each day as I look at my children is another accomplishment and a blessing.