Genetic Testing Is Key To Both Early Detection And Hope

Genetic Testing Is Key To Both Early Detection And Hope 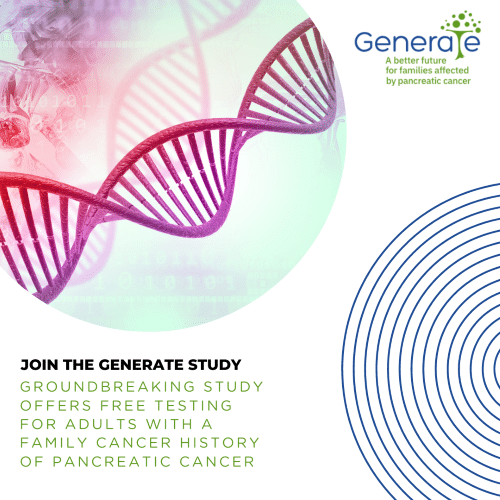 Scott was diagnosed with pancreatic cancer on a Friday afternoon in November of 2004, kicking off one of the worst weekends of his life as he and his family dealt with the shock of the diagnosis. Today, as a pancreatic cancer survivor and patient advocate, Scott works to bring people hope, focusing on building awareness and ensuring that people who are impacted by pancreatic cancer have the information and resources they need, when they need them. He believes that the GENERATE Study, and genetic testing, play an important role in this pursuit. In the eyes of Scott and much of his family, genetic testing is key to both early detection and hope—an idea ignited by his mother.

After her battles with both breast and ovarian cancer, Scott’s mom took a close look at her family’s history of cancer and underwent genetic testing. She soon learned she was positive for a BRCA mutation, which is now known to increase an individual’s risk of breast, ovarian, pancreatic, and several other cancers. Her courageous act, seeking genetic testing long before it became routine for people with a personal or family history of cancer, set the standard for her siblings and children, and left a lasting positive impact.

This was not her first encounter with cancer. Growing up, Scott’s mother had her heart set on a career in nursing, and when she graduated from high school, she put this plan into action when she enrolled in nursing school. Her studies were cut short, though, and after her first year of nursing school, she had to return home, to care for her younger siblings, after her mother was diagnosed with ovarian cancer at the age of 44, and unfortunately passed away from the disease.

When Scott was diagnosed with pancreatic cancer, his family was further motivated to learn their risk and take action. Today, more than 30 of Scott’s relatives have undergone genetic testing, a trend pioneered by his mother. The results of their proactivity are testament to how important genetic testing is in supporting early detection and improved outcomes for those at risk for hereditary cancer. Scott’s brother, Steve, is living proof of just how critical genetic testing is.

Following a positive genetic test result, Steve was encouraged to undergo increased cancer surveillance.  With the knowledge of his genetic predisposition, combined with regular screenings, Steve was diagnosed with stage 1 pancreatic cancer. Such an early diagnosis is extremely rare, given that symptoms are often ambiguous or non-existent. In fact, only about 10% of pancreatic cancer cases are diagnosed this early. Because his cancer was caught early with the help of genetic testing, Steve made a full recovery.

For Steve, genetic insight made all the difference in detecting cancer early, when it is more treatable, as well as identifying appropriate treatment options. The impact of genetic testing can truly be lifesaving.

Now, with the help of the GENERATE Study, adults with a family history of pancreatic cancer can seek this knowledge too. This groundbreaking study is offering in-home genetic testing, at no cost, to eligible adults living anywhere in the U.S. who may be at risk for pancreatic cancer. To find out if you are eligible, go to http://generatestudy.org/.