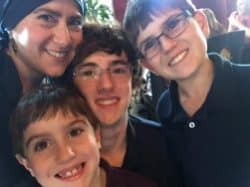 This blog is excerpted from Leslie’s Dvar Torah (speech) at a Sharsheret Pink Shabbat in Raleigh, NC

For those who may not know, just over a year ago I received my first diagnosis of breast cancer.  They found something in my annual mammogram – the size of a grain of rice that although caught early, needed to be removed.  Subsequent testing via MRI found a second cancer, a much larger mass in the other breast. This one wasn’t small and wasn’t caught early at all.

So, on September 22nd of last year, which was Erev Yom Kippur, I had a double-mastectomy.  The next day – Yom Kippur, I found out I had two different kinds of cancer. The first measured over 2 cm and was Stage 2. It was an invasive cancer, highly aggressive and had a strong pattern of recurring. The other tumor wasn’t invasive yet, but was already measuring 9 cm. I found out on Yom Kippur that I would need a year of chemotherapy – 17 rounds.

In this week’s parsha (Torah Portion), called Ha’Azinu , Moshe begins by describing the presence of God in nature as being as evident as the rain or dew that nourishes the fields and gardens. God is entirely just, always good, always compassionate and forgiving.

I read this and wondered how can a God that is always just and good allow any of this to happen? Was it because I didn’t believe in God strongly enough? Did I do something to cause this to myself?  Why me?  Why did this happen?  How can I reconcile a God that is “always good” with my present position?  I can’t say I know that I have the answers to these questions, but today I’d like to share the little rays of light that made it possible for me to make it through some of the dark times I’ve had this year.

After the initial surgery, I had another surgery to place a port to get ready for chemo. My chemotherapy started in October, and with that, I had all of the side effects you might expect, and then some.  Every chance my body had, it chose to take the more rare path. I had/have side effects that tend to affect only 5-10% of people, and I even had allergic reactions to the chemotherapy itself.  Nothing was “simple”. Most people have 5 to 7 days of “ick” with each chemo cycle, I had 18 days of symptoms in each 21 day cycle. When I transitioned from traditional chemo to a newer antibody treatment – from which most women have no side effects – I still had “ick” for 5 to 7 days each cycle. When I do something, I really go all the way!

I was recently struck by something my son, who just turned 8, said to me. He said that this had been his best year ever. Similarly, someone recently asked me to reflect upon this year as my own birthday approached last month, and I replied that while this had certainly been the most hellacious year of my life, it was also a year where I think there were some of the best parts of my life.  I responded to the question, but yet when I heard myself respond, it seemed odd to have come from me.

How is it possible that this was my reaction given what I just went through – and am still going through?

One of my friends, Tammi, (who had her own battle with breast cancer years ago, and spends time volunteering as a Sharsheret Mentor for newly diagnosed patients) said to me, “You’re about to go through this big, dark, scary forest. You can’t go around it or over it – the only way to deal with it is to go through it. Your doctors and nurses can provide the light for you to be able to see through it and your husband and friends are there for you to lean on – providing support for you to be able to get through this, but you need to travel through it no matter how big dark and scary it is. When you get to the other side – it’s calm and beautiful – and I’ll be here for you.” That analogy carried me through the hardest times.

I’ve used her analogy to try and look for the light amidst the dark and scary at each step of the way.

So – the radiologist who found my cancer told me she could have given a clear pass on the scan, and almost did, but something was just bugging her about it, and she really wanted to have me check it out.  Lucky.

I’m not only lucky that it was found, but that it was found early enough that it hadn’t yet spread to my lymph nodes. What that radiologist found turned out to be the second most aggressive form of breast cancer. And yet, if I hadn’t had this invasive cancer, my doctor would not have requested the MRI that in turn found my second cancer – the one that turned out to be 9cm.  You could say it was lucky I had the invasive and aggressive tumor at all – so that the other larger tumor could be found before it also became invasive.

I remember sitting in the hospital after my mastectomy; I wasn’t even in a room. I never got a room due to an insurance screw-up. Instead, I was in a recovery bay with a curtain (and I got sent home 11 hours after surgery).  I remember sitting there thinking how lucky I was that I had insurance.  Not everyone has insurance, and not everyone can afford to pay extra out of pocket for a 3D mammogram – the 3D directly resulted in my cancer being found. The radiologist told me that’s what saved my life.

I’m lucky that there is a treatment today that has taken my type of cancer from being the second most deadly, to having good survivability rates. Just 10 years ago I would have been in an extremely perilous situation.

Earlier today, I benched (prayed) Gomel, our traditional prayer for someone who has come through a dangerous time.  My friend, Rabbi Robert Scheinberg, who was our Rabbi in Hoboken, NJ, writes that our tradition requires us to say this prayer in the presence of the community to acknowledge the support that is essential to weathering the most dangerous and frightening parts of our lives.  As well, our tradition teaches us that life involves mutuality.  Sometimes we are the givers, but we must equally know how to accept help.

And show up you did.  I remember thinking – and I continue to believe – that I was one of the lucky ones because I have so many friends who jumped in to help.  I had SO MANY MORE friends than I knew! For 7 months I didn’t get out of bed.  From the beginning, and continuing through today, so many friends have rushed to help by making meals, checking on me, driving the kids. I always knew someone had our kids – I just didn’t always know who.

They say breast cancer puts you in a sisterhood you never wanted to be part of.  I feel so lucky and thankful for the women who came before me, who mentored and guided me, who made the journey easier.

I am thankful for organizations such as Sharsheret, an organization specifically focused on young, Jewish women battling breast and ovarian cancer, who understand the needs of someone like myself, who was diagnosed 20 years earlier than the average breast cancer patient, who had to get through the physical and emotional needs of diagnosis and treatment, while simultaneously helping my children with homework, science projects, attending parent-teacher conferences, and making sure the emotional needs of my children were being met in addition to my own.

I don’t want to say that what I’ve taken away from this year is that every cloud has a silver lining or that things happen for a reason (and I certainly still have my “It’s not fair” moments). But realizing that it could always have been worse is what got me through.  I have a friend who had a port infection and was in the hospital for 3 months, other friends are battling breast cancer without insurance, and I have friends who were diagnosed at much later stages.

That is what makes it possible for me to go through this without being paralyzed with fear all the time – realizing that I am one of the lucky ones. Being grateful for what I have instead of bitter about what I don’t.

Even though my initial treatment might be over, I’m not done yet.  I’ve got some serious fatigue to deal with and some other lingering side effects. I’ll be taking hormone blocking medications for the next 5 to 10 years, and I still have a few additional surgical procedures coming up. I’m rebuilding my relationships with my friends, some of whom I haven’t seen or been in their lives for a year, and also rebuilding relationships with my husband and children – seeing how they’ve grown and changed in the past year while I watched most days from bed.  It’s not just me absorbing this into my identity, but also seeing who my kids have become, and who I have become, because of our experiences.

Another wise friend Louise reminded me that at Rosh Hashanah, we read a verse that states “Zeh hayom asah Adonai nagilah venis’mechah bo.  “This is the day that G-d created; we shall rejoice and be glad today.”

So maybe the best way to find God when I question his or her existence, is to make the most of each day (THIS day, each one I am lucky to have) and to look for the little lucky things that make it possible to get through whatever darkness exists on any given day, whether it’s a big dark scary forest, or a small one.

As we are about to celebrate Sukkot, I wanted to offer my own wish for all of us. I hope that as we look up from our Sukkahs, we can each find twinkling stars in the dark sky, and that they will remind us to always look for the little, lucky things, the little points of light amongst the darkness, to help guide us through our lives.