I had always told myself when I was deciding to run a marathon that I want it to be something more than a race, more than just training to run 26.2 miles.  I wanted to use this opportunity to help others.  By doing this it would give my running more meaning.  There are many reasons why I wanted to raise money for Sharsheret in particular.  Recently I ran my third ½ marathon with my friend Ethan Wasserman.  Ethan lost his first wife to breast cancer.  She was in her early thirties when she died not long after having her second child.  I will always remember how giving Michelle Daman Wasserman was.  I remember standing by her graveside and telling myself that it is important to keep a part of her character alive inside of me.  She had a way of touching the people around her.  October will be the seven year anniversary of her passing and I can think of no better way of celebrating who she was by raising money for an organization that was there for her.  The best part I am not alone.  I will be running the marathon side by side with Ethan as we both raise money for Sharsheret.

Another reason I want to raise money for Sharsheret is that I recognized how important it is to get support when you are a young Jewish woman fighting breast cancer.  One of my inspirations for running is my sister.  Often on long training runs when I feel like giving up, I think of how much will power she has demonstrated in her fight against breast cancer.  I have seen how having supportive people around her who she can turn to for help has made a big difference in her journey.  Luckily things have been going well, but it is still a struggle.

The last reason why I run and raise money is because I know too much.  Being a pediatrician I have seen how breast cancer can affect families, especially children.  With my medical background I understand what it means to have a family history of breast cancer.  I have four dear daughters and breast cancer runs in my family.

I know I am not special.  Almost everyone has been touched by breast cancer, whether it is a family member, friend or co-worker.  Even though I may not be special, sometimes ordinary people can do amazing things.  So I hope to do two, run the New York City Marathon and raise money for Sharsheret.  It is my turn to give back. 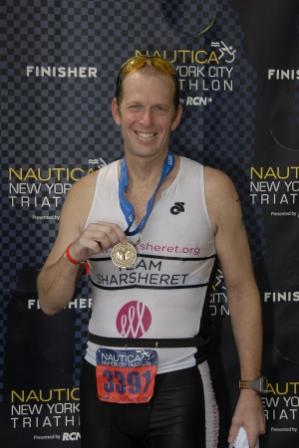 In 2011, I had the privilege of participating in the NYC Triathlon for Team Sharsheret. The personal sense of physical accomplishment of this event, my ﬁrst Olympic distance triathlon, was eclipsed by the knowledge that everyone on Team Sharsheret, and their generous sponsors contributed their time, resources, sweat and emotion to such a vital cause. In doing so, they made a lasting difference to so many people.

Sharsheret’s mission is to give support to women and their families who are facing breast and ovarian cancer. This year I decided to up the ante combine two grueling races to support the women and families Sharsheret helps. I will compete as part of Team Sharsheret on September 9th, in the Tough-Man Half Ironman race in Westchester,
NY and on November 4th I will run the ING NYC Marathon.

I look at it this way; what these mothers, daughters, grandmothers, granddaughters and sisters endure during their ﬁght is way more than the pain of any race.

Every mile of both these races will be infused with the knowledge that we are all making a tangible difference. That we are giving comfort to a mother of young children, advice to a father whose wife is in physical and emotional pain, inspiration to family members and encouraging all who are affected by breast and ovarian cancer.

Please join me in making a difference to the husbands, children, parents, siblings and friends whose, mother, daughter, sister, or granddaughter is facing the ﬁght of their life. Please join me in creating awareness so people know the great things Sharsheret does for so many. Please join me in the race so that we do not run in memory of but in honor of…

On behalf of the women and families that Sharsheret helps and my team mates, thank you
for your generous contribution.