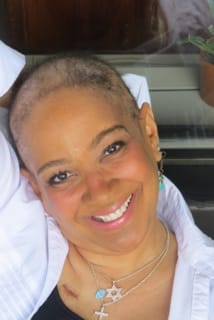 On February 14, 2018, my husband and I were preparing to take a trip to the shore to celebrate Valentine’s Day. First, we stopped at a local hospital to get my routine mammogram. I was not too worried as I had been monitoring my breasts faithfully through yearly mammograms. Although I was informed on several occasions about dense breasts, cysts, and most recently, calcifications, I was convinced that I would once again receive good news and head directly to the shore for an evening of relaxation.

When I walked into the room for my mammogram, I was met by a very pleasant technician who verified my information, instructed me to put on a gown and left the room. When she returned, the mammogram began, but I remember that she had to take a few additional pictures. As you can imagine, my mind started to wander about what she was seeing and why she needed to take the films to the radiologist for a closer look. My heart began to race, feeling like it was going to pound out of my chest. When she returned to the room and told me that the radiologist would like to meet with me in the conference room, tears filled my eyes as I knew that something was not right. I requested that she bring in my husband who had been sitting in the waiting room. In addition, I made sure that I dried my eyes because I did not want to worry him if he saw that I had been crying.

At this point, both my husband and I met with the radiologist who mentioned calcifications and a need to have further testing. I could not hold back the flood gates any longer, and I started to cry. I could tell that both women felt horrible about the news that they had just delivered.

When we met the surgeon he told me to stay positive, and that there was a good chance that it was not cancer. If it was, it may be a small area of ductal carcinoma insitu. I scheduled my first breast biopsy and went back in to have the procedure. I was sore when they were finished but I was determined to stay positive and continue with my plans to go to the shore. After all, this may not be cancer.

Now, let’s fast forward to Monday, February 19th, the day from hell. I received a call which informed me that that I had breast cancer. When I heard the words, I believe I was in shock and remained speechless for several minutes. I just knew something was wrong the moment I picked up the phone and the surgeon asked if I was at work or at home. Once she delivered the news, I slowly walked into the other room and burst into tears as I told my husband. He held me and told me that we would get through this together, but the tears just would not stop.

The following day, I called a local hospital to set up a consultation and my long journey began. As luck would have it, I just happened to have my DNA tested in 2017 and discovered that in addition to being approximately 52% African American, my heritage also included European DNA (some of which was identified as Ashkenazi). I thought the discovery was fascinating and started thinking more about my background. In doing so, I recalled a few very interesting details that caused me to question whether or not my Ashkenazi DNA could have come from my grandmother. I remember thinking about my childhood and how my grandmother sent me to summer camp. Surprisingly, it was a Jewish day camp, and I was the only little African American girl in attendance. As a child, I never questioned why I attended the camp, I just enjoyed my time with the other children. In addition, I can recall breakfast with my grandmother which often included smoked fish and bagels. I can even remember enjoying her fried “potato pancakes” (I had no idea that they were actually latkes).

As I thought about my history, I was more determined to find out if the DNA test was accurate. I had genetic testing done at the hospital in which I had chosen for my cancer treatment. Much to my surprise, I was told that the results revealed that I had to have a Jewish grandparent. Now….my mind was really racing as I knew that my Ashkenazi DNA could possibly put me at risk for other types of cancer, especially if I carried the BRCA1 or BRCA2 mutation. Well…as luck would have it, I soon discovered that I tested positive for the BRCA 2 mutation. Hence, I had an extremely high chance of having ovarian cancer.

I felt like I was in shock! I had breast cancer and knew that I needed to make a decision soon. Did I want to have the cancerous breast removed and take my chances that I would never have a problem with the other? Or, did I want to have both breasts removed to significantly reduce the chances of my cancer returning? Also, I was faced with the thought of whether or not I should have my ovaries and tubes removed because of my DNA and BRCA2 mutation.

I did not know where to turn for support. My family was extremely supportive as were my medical doctors. However, I felt that I had a very unique set of circumstances, especially given my DNA, and I wanted to find someone who had “walked in my shoes.” Luckily, I saw a brochure while in the hospital which explained Sharsheret. I looked at it with tears in my eyes and immediately knew that I needed to reach out to these wonderful women for support. However, I have to admit that I was a bit nervous and wondered if it was ok for me call since I only had “some” Ashkenazi Jewish DNA.

Eventually, I called and spoke with an AMAZING social worker who listened to my story and comforted me as I cried. I knew from that point on that I had found an INCREDIBLE source of strength. The woman with whom I spoke was extremely knowledgeable and compassionate. She even requested my address and surprised me by sending two beautiful care packages that moved me to tears. In addition, she connected me with another breast cancer survivor with whom I spoke about my concerns. It was such a wonderful feeling to speak with another woman who had walked down the bumpy road that I was about to travel.

To this day, the social worker with Sharsheret continues to communicate with me about my progress. Each time I see her email, I am reminded that although my experience is quite unique, I am not alone. Rather, I have an extended family, Sharsheret, which has given me strength, courage and hope. I will, forever, be grateful for their support.