One Note At A Time, A Sticky Love Story

One Note At A Time, A Sticky Love Story 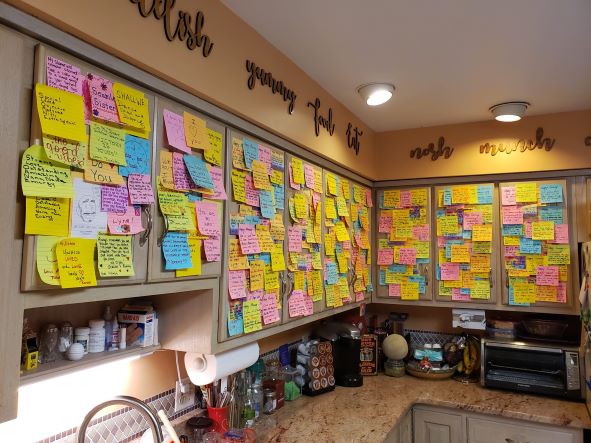 The cupboards of the kitchen are covered with multi-colored post-it notes, the sticky paper squares typically used for To-Do lists. They offer a different kind of reminder—a love story—not that we need any prompting to recall what Sloane and I have together. Colored Sharpies were my pen of choice and so began the sticky note saga on the first day of her cancer treatment.

Happy Wednesday — You can, you should, you will, and if you are brave enough to start, you will finish. Loves you the most, G

The chemo treatments spanned fifteen months, starting June 12, 2019, until September 22, 2020. At the end of her treatment, 500+ sticky notes wallpapered the kitchen. Why? Because Post-its have been helping people stick together in school, business, and life, since 1974—coincidentally, the year we first met. Who’s to say my notes for Sloane haven’t been helpful? Because of this life altering event, I was so focused on Sloane’s treatment and subsequent recovery, I didn’t realize and wished I had taken advantage of all of the services and support that Shasheret could offer both of us in our time of need. 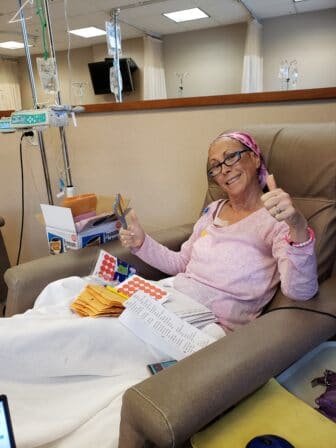 I can’t promise to fix all of your problems, but I can promise that you won’t have to face them alone. LYTM, G

Our story began in Levittown, New York, a seven square mile community on Long Island, the birthplace of American suburbia. Built for ease and convenience, Levittown was—is—somewhat idyllic. People don’t tend to leave. Many of our friends are still in the vicinity. In fact, The New York Times once called Levittown sticky because, it went on to say, “Many of the children of the original homeowners have grown up and grown old in these seven square miles.”

Happy Sunday – The first time I saw you, my heart whispered, “She’s the one!” LYTM, G

I first met Sloane when she was thirteen; I was fifteen. She was cute, sassy and funny with curly brown hair—her crowning glory. I was tall and skinny, with a big nose and a bigger afro. One hot day in 1974, I spotted her walking down one of those suburban streets with her best friend, Fern. A half block behind them, I loped along with my friend Merrit. We had the same destination: someone’s house where a posse of Long Island teens were hanging out. Long term, we had a lifetime together, although we didn’t know it then, and it hasn’t been a completely straight shot to the destination.

Happy Tuesday — You & me, me & you. Loved that we played jacks, watched game shows & loved each other all before sixteen! LTYM, G

We ditched school and hung out at her house, watching game shows, and playing jacks. She kept her set in a glass jar and used a butcher block underneath her bed as a playing board. Each minute we spent together; we fell deeper in love. We made pastina for lunch and engaged in marathon make-out sessions, listening to her vinyl records. One of our favorites was Elton John’s Caribou. During one session to the song “You’re So Static,” we swore we heard her mom yelling—SLOANE! —from behind the locked door. Was it really even her? Did she know what we were doing? Did we even care? Rock was the soundtrack to our teen years. Blasting the beat of our days, of our hearts, we sang as we walked the streets, met up with friends, hung out. Elton John, The Dead, The Stones, CSN, the Beatles, The Doors, Fleetwood Mac, The Who, Billy Joel, Pink Floyd and Led Zeppelin—the list goes on and on.

Happy Monday! Break on through to the other side. LYTM, G

Puppy love isn’t meant to last. We broke up during high school and in 1977, her family had moved to San Diego. Still, we were stuck on each other, and on her many visits to the east coast, continuing to meet—intimate trysts unbeknownst to anyone else we were seeing. That’s the way we were. Our bond was undeniable. Something between us was strong as adhesive. However, things don’t always work out as planned. The timing just never worked for us. After graduation, I got engaged and Sloane married young to a guy she had met at summer camp in Rock Hill. I never did marry the other girl.

I woke up Labor Day morning, 1982, and had a dream about Sloane. There were no cell phones, no Google, no Wi-Fi. I found her in the White Pages under her husband’s name. I asked her to meet me for lunch at a small French restaurant on Long Island called La Brasserie. We met again in Midtown at the 37th Street Hideaway, aptly named for a romantic liaison. We hugged and kissed and felt a spark that was different than with anyone else.

Soon thereafter, we met at my parents’ house. They were away, so I had invited Sloane for dinner. I cooked her my specialty: chicken a la Glenn. I had just dipped the chicken into the flour and was placing it into the skillet, when the doorbell rang. Sloane ran upstairs to hide before I opened the door. It was Merrit. Like something out of a movie, or a 70’s sitcom, he barged in to tell me that his sister-in-law had been at the 37th Street Hideaway. She’d seen me kissing the neck of a young woman wearing a wedding band on her finger. Who was the married woman? Merrit had to know.

Happy Friday – When I looked into your eyes, I didn’t see just you. I saw my today, my tomorrow, and my future. For the rest of my life! LYTM, G

Sixteen months after marrying the boy from summer camp, Sloane knew it was a mistake. Four weeks later, she moved in with me. On October 13, 1983, we were married, and in the early fall of 1984, on the Jewish New Year, our son Jeremy was born. Three years later, our daughter Alexa arrived. Our life unfolding, we bought a home in Levittown, just one block from where we’d played jacks, and started raising our family.

After 9/11—in 2002—Sloane and I left our tract home, boxed-in backyards, sidewalks, and village greens for fresh air and wide-open space; our dream home on six acres in the Catskills. Not a neighbor in sight. We’ve been living here on this vast, beautiful property overlooking the Mombaccus Mountains. Instead of running into friends and family for rushed hellos on the street, or at the market, they visit us here for long, vacation-like weekends. We have memorable gatherings hosting our lifelong friends.

Happy Monday – A strong woman is someone who is able to smile in the morning, like she wasn’t crying last night. LYTM, G

The diagnosis came two weeks before our annual Memorial Weekend party. It was a nasty form of cancer; aggressive and fast. But Sloane didn’t want it to be a pity party. She didn’t want people talking about her, whispering, worrying. Before our friends were to arrive, she called each one of them to break the news. She had cancer. But that was no reason not to celebrate.

Happy Sunday – I love you more than potatoes, but please don’t make me prove it. LYTM, G

It was Fern who arranged for the artist to come to the house to tattoo Sloane’s bare head with a henna crown. The ink transformed her. She’d always taken so much pride in the curls she was born with. She had a walk-in closet’s worth of product to work those curls. (No friction! she always yelled, whenever I reached out to touch her hair.) The henna curls—their elegant design, calling attention to the shape of Sloane’s head, the framing of her face and soulful eyes—gave her the courage and confidence to continue. Each tattoo lasted several weeks. Sloane got hennaed a few times. On one occasion, she had a chai design which means “to life” in Hebrew drawn on the nape of her neck. Wearing her crown was one of the most empowering moments that Sloane had experienced. 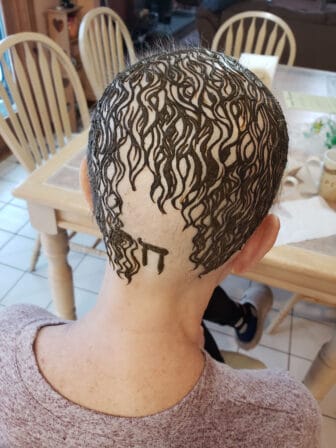 Happy Saturday – Love is…Writing you a note of love. Every Day! LYTM, G

This all occurred between 2019-2020, with her recovery lasting well into 2021. We are all aware of the events that have happened during this time. The world suddenly became dangerous: politics, Covid-19, quarantine, lock-down…. But Sloane and I tried not to dwell on the negativity. She was scared, of course, and so was I. But somehow, those 4” x 4” post-it notes focused my thoughts and blocked out my fears. What mattered most to me was to fit a few words onto several square inches of paper: writing about my love for Sloane, our shared history, and our beliefs. Each morning I would get up before her to jot the notes. Maybe it was a lyric from a song. More often, it was my heartfelt thoughts about our life and our memories. Whatever it was, the words brought me back, grounding me in what is essential. And, they have carried Sloane through the hardship of chemo, the surgery, the radiation burns, the exhaustion, and fear.

Happy Thursday – We love with a love that is more than love! LYTM, G

Everyone who has seen the notes tell me that they have been touched by the words and stories they represent. Just as Sloane has survived her battle, every post-it has survived, chronicling the love that we have for each other. Hopefully they inspire others going through their own difficult journeys. One thing is certain: Sloane is my best friend, soulmate, and the love of my life. Thirty-eight years later, we’re still married, with two kids, a granddaughter, and two more on the way. The adventure continues and the sticky stories are still being written, one note at a time…I continue to tell her: Loves you the most!

Happy Tuesday – All that you are is all that I will ever need. LYTM, G 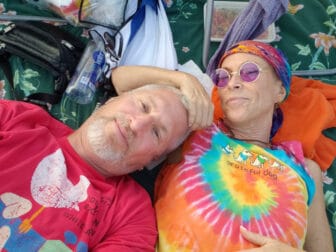