Ovarian Cancer: Let’s Talk About It

Ovarian Cancer: Let’s Talk About It 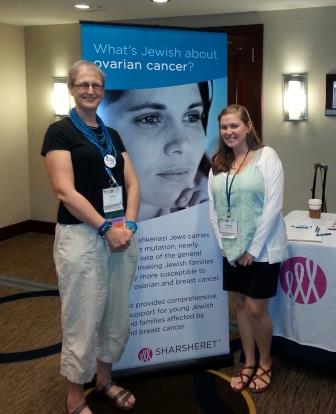 Inspiring, brave, passionate.  All words one can use to describe the women and caregivers I met at the Ovarian Cancer National Alliance Conference in Washington, D.C. this July.  One such woman is Carey, a Sharsheret peer supporter and founder of Teal Toes, an ovarian cancer organization that encourages groups to paint their nails teal to spread awareness about ovarian cancer. Women like Carey know that the first step in the fight against ovarian cancer is a simple one: talk about it. Over 20,000 women are diagnosed with ovarian cancer each year, according to the National Cancer Institute, and many cases are not diagnosed until later stages of the disease.  Regular screenings for ovarian cancer are uncommon, and the signs and symptoms of ovarian cancer, such as back pain, bloating, and feeling full too quickly after eating, can be often overlooked.

Individually, knowing the signs and symptoms will allow us to be proactive about our health.  As a group, discussing ovarian cancer on major public health and advocacy stages can lead to earlier detection and treatment advances.  1 in 40 Ashkenazi Jews carries a BRCA mutation, and women with a BRCA gene mutation have 40% – 60% lifetime risk of developing ovarian cancer, making discussions about ovarian cancer even more important in our community.

As the summer begins to wind down, we are busy preparing for National Ovarian Cancer Awareness Month in September.  September is the perfect time for you and your family to have conversations about your risk, and to raise awareness.  Click here to order Sharsheret’s free educational resources about ovarian cancer to share with others, or call 866.474.2774 to learn more about our Ovarian Cancer Program and ways to get involved at Sharsheret.