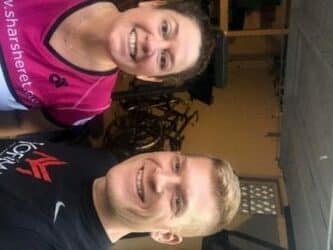 Anne Spar’s Story
I didn’t realize how far reaching the effect of my cancer would be. At the time it radiated out from me in concentric circles. My immediate family members formed the inner circle, my close friends the next one moving all the way out to people who I ran into who never knew what had happened. One person moved from the outer circle into the inner circle without me ever realizing that would happen.

Hans, my personal trainer, became aware of my biopsy, which most people never knew about, because I had limited range of motion the next day. He knew about my surgery date because we were working to get me as strong as possible before to make my recovery that much easier. And he was there the minute I was given clearance to start exercising. He worked with me every step of the way and I am strong and fit because of the work we do together. So I thought that was it.

Until I showed him the email I got from Sharsheret that they were looking for runners in the NYC Half Marathon. I’m not a runner, but I know Hans is and I thought he would be tempted because they would fly him to New York. And the next thing I knew not only is Hans running for Sharsheret, but his wife and sister are, too. When I asked him why, because I know he can buy his own ticket to New York, he said that my cancer journey was his journey, too. He had seen how much Sharsheret meant to me, and he was grateful that I had that emotional support, because he could only help with the physical strength. Thank goodness I had a box of tissues nearby.

From Anne Spar’s personal trainer, Hans Rearick
I’ve been a personal trainer in Los Angeles for over ten years and the most thrilling aspect of my job is that it does become personal. I truly get to know my clients in ways that most don’t. I see them in their most vulnerable moments: before they have showered, before they have put on their faces, before they have put on their suits, before they have composed themselves for the world – all the while asking them to give me ten more push-ups, burpees, lunges, pull-ups, sets. A true bond forms, an element of trust that is difficult to explain. I make it my business to push them to try a little harder after they’re convinced they’ve given their all, while remaining friendly and professional.

It was less than two years ago when a client said to me “they found a lump.” This client is a very strong willed woman, wife and mother of three, whose biggest fear was not being able to be there for her family. I had never seen tears in her eyes before. Her husband, a joyful, charismatic and dedicated individual, was completely silent that day. I then learned that he had lost his mother to breast cancer when he was 22 years old. They both quickly accepted the fact that this was going to be hard, and faced the cancer head on. Her sister-in-law worked for Sharsheret and this was the first I heard of them.

It was very soon that she underwent a double mastectomy.

I reported to their home before 7am to train her husband. You can imagine my shock when I was spotting her husband, the door opened and I heard “I’m going next!” I turned around and there she was, standing with determined look on her face. It had only been 8 weeks since her major surgery. She stepped into the gym after his session and we began getting her back physically. We had come so far before her surgery, and she was ready to get back to that point – and further. We started with straight arm lifts in front and out to the side using absolutely no weights or bands. She wasn’t able to go past halfway. We started with slow short walks. We started with a lot of rests. But she got better, she improved, she stayed committed. In less than one year, she had worked her way back to her previous abilities. Today, she has far surpassed them.

During those workouts I learned a lot about Sharsheret. I may have been able to support her with her physical recovery, but Sharsheret was there every step of the way for her emotionally, logistically and with the resources she needed. When asked if I wanted to run the NYC Half Marathon representing Sharsheret it was a no brainer. Yes!!