By Shoshana Winter, Sharsheret Program Participant and Peer Supporter May 15, 2017 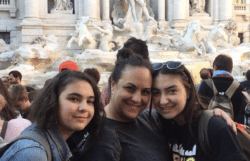 Just a few days after my 12th birthday, my maternal grandmother, Sara Grodnik, passed away. She was 60 years old. Though I didn’t know exactly what her illness was, the last few years of her life were occupied with a series of surgeries and procedures that kept her in the hospital for weeks or bedridden, with my mother going out to her home in Queens to care for her. Sundays consisted of my father driving me and my two younger brothers to visit her. But, through all of this, I never knew what was wrong with her and what eventually took her life. Twenty five years later, only three months to the day after I gave birth to my third child, my mother, Joyce Zilberberg, passed away at age 59. This time, I knew a little more.

My mother and I had a complicated relationship and we weren’t in close touch for my most of my early married life. Ironically, it was breast cancer that brought us a semblance of reconciliation. One evening, I received a call from my father (who was also estranged from her) letting me know that the following day, my mother would be undergoing a mastectomy and reconstruction for breast cancer. I did not know anything about her diagnosis, how she found out, the stage of cancer and what her prognosis was. I called her to tell her that I was going to be at the hospital and spent most of the next day in the waiting room at Beth Israel. Although I tried to find out more about her prognosis, the tenuousness of our relationship coupled with the sense of avoidance with which she treated it, made it difficult for me to learn more.

Several weeks after her surgery, at age 35, I had my first mammogram. If there was one thing I was certain of at that moment, it was that I was going to go about managing my risk very differently than my mother did. When her cancer recurred less than two years later, I entered the high-risk clinic at Sloan Kettering. I diligently went twice a year to every mammogram, sonogram and doctor’s appointment and followed the evolving protocol that my doctors recommended for me. I read everything I could about risk associated with family history, new research and testing and how I could do more to manage my risk.

Ten years later, I got the call I think I had always been expecting. But, my experience could not have been more different. Because I was being monitored twice a year, my annual sonogram found a small, early stage tumor that my mammogram, six months earlier, had not been able to detect. My cancer was early stage and I was fortunate enough to be able to treat it with a lumpectomy and six weeks of radiation.

This month marks my four-year anniversary of my diagnosis and surgery. I am so grateful to live in a time where conversations about breast cancer are not taboo, where organizations like Sharsheret exist to support those going through this experience and where information about the disease flows freely for anyone seeking it out. I am thankful to my friends and family who encouraged me to stay vigilant and to keep talking about it, instead of hiding in the shadows. I don’t know what the future will bring for me or for my daughters, but I am thankful they live in a world where they can ask questions, seek support, be empowered to pro-actively care for their own health and ensure that the legacy of darkness from which they were born will be broken forever.