Taking Control Of My Breast Health

Taking Control Of My Breast Health 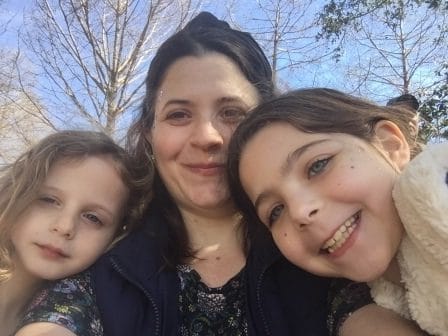 After my BRCA test came back negative in 2010, I wrote a Sharsheret blog about my relief and volunteered to be a Sharsheret peer supporter for those deciding about genetic testing. My mom died of breast cancer in 1994, about six months before the BRCA test was released. She was an only child, as am I, and there is no other breast cancer on either side of my family so I used magical thinking to believe I was in the clear for the long haul. I had two daughters, now aged 6 and 8, breastfed them for a combined three years, and appreciated my breasts in a whole new way.

Last summer I received the results of the most up-to-date breast cancer testing: my CHEK2 gene came back in a gray area with a “variant of uncertain significance” that could increase the risk of cancer “approximately two-fold in Ashkenazi Jewish patients only,” aka me. I was stunned when my hospital’s breast navigator told me to see a breast surgeon and start thinking about a prophylactic double mastectomy. As I began my own research and inquired with a host of medical professionals, the responses were 50/50. I wanted to be told what to do and have it be 100% clear, not up to me in the end. One especially kind nurse navigator said this was a chance to be in control of my breast health if I was open to having surgery. Her words and the gut feeling about my breasts that I’ve lived with since my mom died led me to my 100%.

My prophylactic double mastectomy came next. I was so scared and filled with dread, but I have indeed taken control of my breast health. I will not likely face treatments, or the possibility of recurrences, or my daughters losing me before they’re out of the nest.

I underwent a prophylactic double mastectomy for my daughters, for peace of mind, and because as much as science has learned about breast cancer and genetic testing for it, there’s even more we don’t know, especially about metastatic breast cancer like my mom’s aggressive illness.

Before my surgery, I gave my daughters “superhero names” to help them feel some control. They were worried, scared, and full of questions about my surgery. At the time they saw it as taking me away from them, but I think as they grow up they’ll come to see their always brave mom became a true superhero on the day of my mastectomy and will continue to be on many breast cancer-free mastectomy anniversaries to come.

My follow up surgery to my prophylactic bilateral mastectomy was one year ago this past February, which happened to fall out on Sharsheret’s Pink Day. Seeing all the breast cancer awareness and education being spread by students around the country on Sharsheret’s social media made me feel even more proud to be connected through their Peer Support Network. Educating young people about having the talk and knowing their family history will help safeguard their future, and make them better prepared to deal with these kinds of decisions should they ever need to.