The Pink Passion Project of a Teacher at Academies at GBDS

The Pink Passion Project of a Teacher at Academies at GBDS 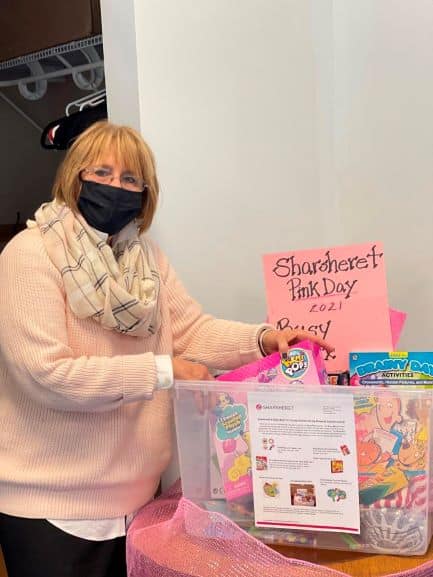 For Mrs. Bloomberg, Math Coordinator and 5th grade math teacher at Academies at GBDS, what started as a small fundraiser has, over time, grown into her passion project. Six years ago when Ellen Bloomberg began working at Academies at GBDS, the Head of School at the time challenged her to run the first Sharsheret fundraiser. Mrs. Bloomberg was inspired by the fact that Sharsheret was started by one young Jewish mother with breast cancer and no resources, so she decided to try it out.

That year, on the first Pink Day for our school, Mrs. Bloomberg covered the halls of the school in pink. Immediately, students and staff were very excited, and in that first year, they raised $469, the most for a Sharsheret school fundraiser at that time. Over time, Mrs. Bloomberg’s passion for the project grew, and she developed a more personal connection to the organization.

Mrs. Bloomberg then became more personally connected to breast cancer. Two years ago, her daughter was diagnosed with breast cancer. “That was when it became real for me. I didn’t know it was going to be that personal, but I immediately realized how valuable their services can be to someone without the same support system and resources that her daughter had.”

Mrs. Bloomberg has continued this passionate work every year, even through the pandemic! “Each year we do something new and different. We try to make it fun and keep the excitement going. We ran a Sharsheret photo contest which was an amazing way to get families involved with Sharsheret in a fun and COVID-safe way”.

“Sharsheret started here by this one woman in Bergen County, New Jersey, and they’re now a national organization, they’re everywhere. I can’t wait to see where they grow from here.”