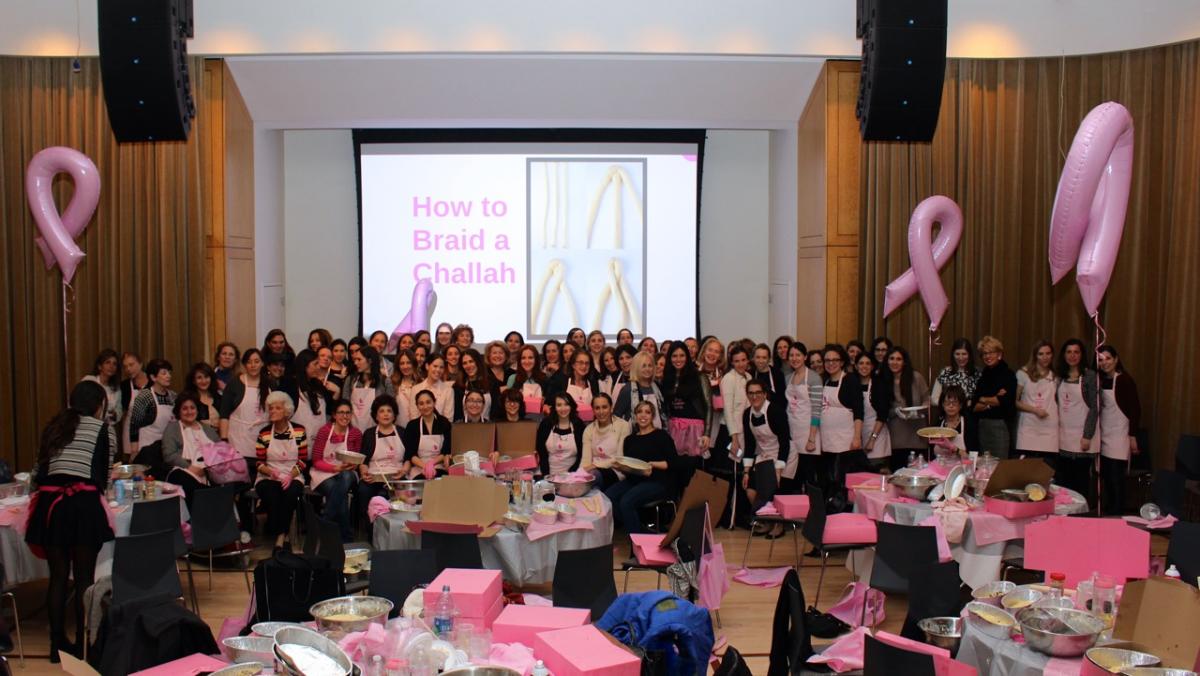 Marsha Dane Stern was an Aishet Chayil who passed away at the age of thirty-six from breast cancer.  Her life of devotion to Jewish education, love of Israel, chesed and family continues to serve as an inspiration.  In recognition of the completion of her thirty-sixth yahrzeit, her sisters, Gail Propp, Sharon Dane and Wilma Kule and her children, Douglas Stern and Deborah Stern Zimbler, partnered with the KJ Sisterhood and brought THINK PINK to KJ in order to raise awareness about the importance of cancer screening and knowing one’s family medical history.

The event commenced with a challah bake, bringing together over 100 women who were coached by ‘The Challah Girls’ in the spiritual art of challah baking.  There was excitement and camaraderie in the room as everyone got down to the business of preparing the challah dough.

While the challah was rising, Dr. Karin Charnoff-Katz, a breast radiologist, addressed the women with a presentation titled, “Cost Benefit Analysis: An Argument for Sharsheret and Screening Mammogram.”  Geneticist and founder of MyJewishGeneticHealth.com, Dr. Nicole Schreiber Agus, then presented, “Beyond Recipes and Traditions: What You Need to Know About Transmission in the Jewish Community as it Relates to Cancer Risk.”  We learned that one in forty Ashkenazi Jews carry the BRCA gene mutation, which is nearly ten times the rate of the general population, making Jewish families more susceptible to hereditary breast, ovarian, and prostate cancer. The importance of screening was stressed by both speakers.

Following the informative presentations, we learned about the mitzvah of making challah and then began the braiding process.  The women channeled the sculptors within, fashioning beautiful challot.  At the end of the evening, everyone went home with numerous challot ready to be baked and enjoyed on Shabbat.

Pink doilies and kippot aplenty were in view Shabbat morning as Pink Shabbat continued, featuring Dr. Naamit Kushan Gerber, a radiation oncologist.  Dr. Kushan Gerber addressed the congregation during services about the role of data in making personal medical decisions, particularly as they relate to genetic testing, breast and prostate cancer screening, and treatment options.   Her speech, entitled, “The Half-Shekel: Knowing and Counting”, also raised awareness of the existing guidelines for screening.

Services were followed by a beautiful hot kiddush, complete with delicious pink ribbon cookies and a wonderful assortment of gluten free cakes generously donated by our neighborhood bakery, By The Way.  Helene Godin, proprietor of By The Way, lost her beloved mother-in-law to breast cancer and therefore found it to be especially meaningful to be a part of Pink Shabbat.

Think Pink provided a valuable service, underscoring the role that the KJ Sisterhood plays in the KJ community.  If either program encouraged just one person to undergo cancer screening or genetic counseling, then the life of Marsha Dane Stern continues to inspire.